The Inventor of the Windsor Knot: The Duke of Windsor

4th Most Famous Tie Wearers of the Past Century: The Duke of Windsor 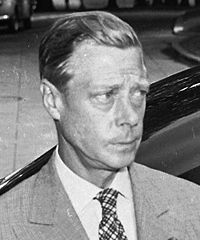 It should come as absolutely no surprise that the Duke of Windsor finds himself making the list of the top 10 tie wearers of all time. Formally Prince Edward, the title of Duke was given after Edward’s 1936 abdication, with the name coming from the area in which Windsor Castle is located. The Duke was not only known for being an exceptionally sharp dresser, but also for making an extremely important contribution to the world of men’s fashion; he invented the Windsor knot, which has gone on to become one of the most popular knots in the world of menswear today. Dressing in the vein of the Duke of Windsor doesn’t have to be difficult, so long as you can learn as much as possible about how he would typically put himself together. The following are just a few things to take into consideration about The Duke of Windsor’s approach to fashion and style, as well as how he wore his ties.

The Duke’s Approach to Style
There’s no getting around the fact that the Duke had an excellent sense of style. Known for wearing double-breasted suits that were perfectly tailored and fit his frame rather perfectly, the Duke certainly knew how to make an appearance when setting out in public. He also had a knack for white tie attire, something that isn’t nearly as popular now as it was back in the Duke’s heyday. The Duke almost always wore suits that featured notched lapels, which perfectly suited his appearance. The Duke’s approach to style is something that any modern man can benefit from taking into consideration, even if they tend to dress somewhat casually as a rule.

The Windsor Knot
While the Duke of Windsor is surely famous for a variety of different reasons, it’s difficult to argue with the fact that the Windsor knot was perhaps one of his greatest contributions to society. While the Four-in-Hand and Half-Windsor are both popular knot options, the Windsor remains one of the most important in men’s fashion, and can be seen all throughout the world at this point in time. Windsor knots are famous for their ability to create the perfect “dimple” in a tie, which can really add to one’s appearance. This being said, it’s one of the more difficult knots to learn to tie, and requires a fair amount of practice in order for one to get the hang of it. Once mastered, however, the Windsor knot is something that will stick with you for life.

Takeaways for the Modern Man
Aside from his overall dapperness, the most important thing that one can take away from the Duke of Windsor is the knot which bears his name. Learning how to tie a Windsor knot doesn’t have to take long, and there are plenty of instructional videos online that can help you to do so. The more time and effort you can put into learning how to properly tie a tie, the more dapper you’re likely to look on an everyday basis.

Thanks for Visiting my Blog!

2 thoughts on “The Inventor of the Windsor Knot: The Duke of Windsor”