The Battle of the Ties: Romney’s Red VS Obama’s Blue 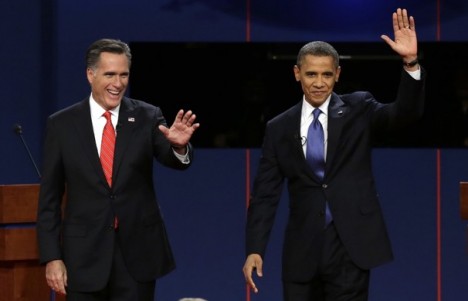 “Dress for Success” should have been on both candidates mind while getting dressed for last night’s first Presidential debate. Overall both did a good job, but a closer look does indeed show some minor differences. After looking at how their suits fitted, what tie they chose to wear, how the ties were tied, how the shirt cut complemented the rest of the outfit, as well as a few other key points, I give the slight edge to President Obama – winning 4:2 over his opponent Governor Romney. In other words: Obama was the better dressed of the two.

Hair Cut: Point Goes to Romney
Obama showed up in his usually short buzz-cut while Romney impressed with his well manicured coif. Without doubt, Romney’s more “high maintenance” hair took at least 20 minutes to style – time that was, at least from my point of view, well spent. 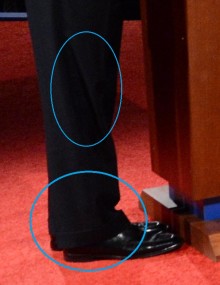 The Suit: Obama Takes This One
Both men wore the classic charcoal gray, American cut suit (2 button, notch lapels, double vented, and pleated pants). While both men wore pants that were slightly too long, it was Obama’s suit that fit a bit better around the shoulders. It was a close call, but point goes to Obama.

The Tie: Romney’s Red “Power Tie” Takes it
Consistent with their parties colors, Obama wore a royal blue tie while Romney decided to dress up with a bold red striped piece. While I personally prefer the color and fine texture of Obama’s tie, Romney did a better job choosing a bolder and more attention-grabbing color. Romney’s red “power tie” exudes confidence without being overly flashy. The stripes on the tie also added a more “business professional” look that is consistent with Romney’s persona. While Romney’s red tie was bold and attention grabbing it did not distract from his face. The clear winner here: Governor Mitt Romney.

The Tie Knot: Obama Takes it
Obama tied his royal blue tie with a perfectly dimpled Four in Hand while Romney tied a slightly sloppy half Windsor. The shape of Obama’s tie knot perfectly complemented the collar style and the dimple gave the tie a nice textured look and better drape. Romney’s knot on the other hand appeared a bit sloppy. The knot was a tad too large for the collar, and the lack of the dimple certainly was an eyesore for every tie aficionado. Thus, the clear winner here is President Obama.

The Dress Shirt: Points to Obama
It should come to no surprise that both men wore the classic white dress shirt featuring classic medium spread collars and traditional barrel cuffs. While both shirts initially looks the same, a closer look shows Romney’s shirt having shorter collar points. While shorter collar points are more modern, it is a style that requires to be worn with the right suit and tie: a slim fit narrow lapeled suit and slightly narrower necktie – something Romney failed to do. Thus, points to Obama.

Accessories: Romney Wins Here
As already seen on the campaign trail, both men keep accessories at a bare minimum. Neither man wears cufflinks, tie bars, or pocket squares (something JFK would have done), but instead opted for a simple and sleep look of wedding ring, wrist watch, and American flag pin. Because Romney chose a slightly larger and more visible flag pin, he deserves to win this point.

Thanks for visiting my blog.

7 thoughts on “The Battle of the Ties: Romney’s Red VS Obama’s Blue”