The 8th Most Famous Tie Wearers: The Blues Brothers 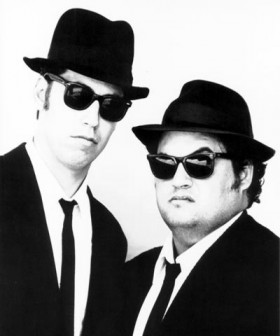 Some characters in the history of television and film owe a great deal of their success to the way they dressed. Pee-Wee Herman, for example, simply wouldn’t have been the same character if he had dressed in a different manner, nor would James Bond. The Blues Brothers (Dan Aykroyd and John Belushi) certainly find themselves fitting into this category, as it was their appearances that truly made them stand out. Beginning as a sketch comedy piece on the ever popular Saturday Night Live, the concept of the Blues Brothers quickly rose in popularity, catapulting the duo towards stardom both on-stage as a musical act, and in the seminal 1980 film The Blues Brothers. A great deal of the Blues Brothers’ look came from the ties they wore as part of their outfits – something that convinced me to place them on #8 of the Most Famous Tie Wearer list. Learn more about how the duo dressed, and how it may even have a positive influence on your own sense of style.

The Blues Brothers Look
There were a great deal of different ensemble elements that gave the Blues Brothers their iconic look. Fedoras, sunglasses (Wayfarer 1s) and black 42-R suit jackets were all crucial pieces that contributed to the overall look, as well as crisp white dress shirts and golf Timex watches. While this was undoubtedly a play on the attire often worn by Chicago blues musicians that the Blues Brothers draw upon as source material, it actually worked quite well for them and turned out to be rather fashionable. Still, there’s no getting around the satirical nature of how the Blues Brothers chose to dress, as well as the fact that the wore the same outfits for every performance in order to fully drive home the iconic nature of their look.

Skinny Ties
Regardless of how many elements went into the appearance of the Blues Brothers, none were quite as important as the ties they wore. The Blues Brothers wore ties that were exceptionally skinny; it is estimated that they were about 5cm in width towards their end, and were just long enough to reach their belts. These skinny black ties were perhaps an answer to the wider, boxy ties that were often seen in the business world during the late 1970s, and made the Blues Brothers stand out as the rebels without a cause they claimed to be. A wider tie simply wouldn’t have worked as part of their ensembles, and would’ve changed everything about the appearance of the Blues Brothers.

Takeaways for the Modern Man
It’s safe to say that dressing like the Blues Brothers will certainly make you stand out, but perhaps not for the reasons that you’d prefer. Indeed, their appearance was “over the top” by design, and meant for the stage more than anything else. Still, skinny ties can be very effective when worn properly, and are quite popular among young men in the modern world. “Hipsters,” for example, tend to hold the skinny tie in high-regard, as it is a huge part of their overall look. While you don’t have to go as skinny as the Blues Brothers, steering clear of boxy ties can be a great way to streamline your look. For more fashion tips with skinny ties, please also check out my articles titled “How to Tie a Skinny Tie” as well as “Skinny Tie Style Tips“.

Thanks for visiting my Blog!