Last week I send a link to a necktie survey that our sister site Bows-N-Ties created. Apparently 1,184 men and women filled out the survey, and the folks over at Bows-N-Ties decided to display the results via this infographic. I talked to Ashley who created this survey and she was so kind to let me take a look at the data. I wanted to know if men living in the US who wear ties more frequently earn more money.

This is definitely a debatable question. Maybe I should rephrase the question to: “Does the way we dress can have an impact on our financial success?” The survey results rather support this claim than prove otherwise. I am a firm believer that the way we dress has an impact on how we are perceived by others. Dressing well (and appropriate) for a job interview, for instance, can only be favorable.

When arguing that the way we dress can be correlated to our income, I often give the following example: Suppose there are two real estate agents. One dresses in elegant suit & tie and drives a newer BMW, while the other, who dresses in Jeans and dress shirt, drives a Honda. Who would you most likely buy a house from? I bet that the majority would do business with the person who appears to be more successful. It conveys trust and competence.

Now what does the data of the survey show? Using the data, I created the following graph that shows what percentage of men for each income bracket frequently wear ties 4+ times/week as well as once or less/week. 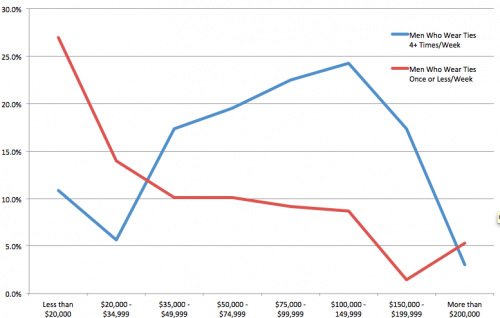 The graph above shows three things that are particularly interesting:

6 thoughts on “Do Men Who Wear Ties Make More Money?”