Choose a Tie for Obama and Romney

What Tie Will Win the Presidency? 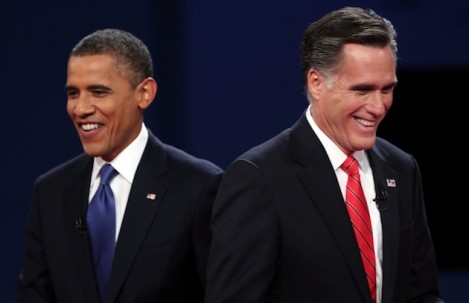 Just last week I wrote an article about the tie Obama and Romney wore during the first presidential debate. For the debate Romney dressed in a bright red striped tie while Obama picked out a classic royal blue accessory. After watching the debate I wondered how much of an impact the tie color has on the voter? Can the tie influence a voters opinion? Did Obama and Romney base their tie choices on research or did they choose their ties at random? Questions like this kept piling up until I decided it is time to find the answer using an online poll titled “What Tie Will Win the Election?“. Click the button below to cast your vote:

How it Works:
After choosing your party, you will be presented with 10 tie choices. Pick the tie that you would like to see Obama or Romney wear during the final debate on October 22nd. The winning tie will then be mailed out to each candidate (thanks to our sponsor Bows’N Ties).

One thought on “Choose a Tie for Obama and Romney”