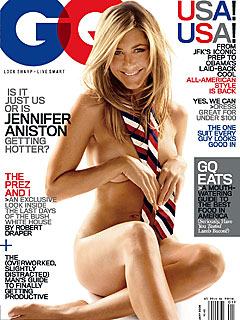 Most people can agree that Jennifer Aniston is one of the most famous actresses in the world today. While her talents on the screen have certainly made her career what it is, it doesn’t hurt that she’s an exceptionally gorgeous woman as well. While it’s been over three years since Aniston first shocked the world by wearing a red, white and blue striped tie in the nude on the cover of GQ magazine, this iconic cover shot still matters, and has even spawned a cult following since first being published. The cover shot is certainly more about Aniston’s beauty than anything else, but without doubt, this also makes her one of the most famous tie wearers of the past century. The following are just a few things that both men and women can learn from Jennifer Aniston’s incredible fashion sense, as well as how to possibly incorporate certain elements of her style into your very own look.

Aniston’s Style
Jennifer Aniston’s style has certainly gone through plenty of shifts throughout the years, but the basic preficice of how she chooses to put herself together has not changed. Aniston is known for her ability to find perfect balance between the “girl next door” look, and that of a sultry, seductive woman. It’s this ability to sway from one side of the spectrum to the other that has made her so appealing to a wide variety of different types of people, as she can just as easily look cute as she can sexy. Having walked the red carpet more times than she can probably remember, she’s been seen in countless dresses, usually sticking to those which scream class and sophistication. While she’s not one to wear a tie on a regular basis, she definitely made headlines the one time that she took this route.

The GQ Tie
Aniston certainly didn’t need anything to make her more famous than she already happened to be, although her GQ cover shot in which she wore a Brooks Brothers red, white and blue tie certainly didn’t hurt her image at all. Made out of Italian silk and cotton, the Brooks Brothers “Triple Guard Stripe Tie” is about as “All-American” as it gets, and features a modern width of 3.25”. The tie itself has become extremely popular since the shoot, and has even been featured on an episode of David Letterman that Aniston appeared on. Brooks Brothers actually sells the tie, and while it does happen to be rather expensive at around $150, there’s no getting around the fact that it’d be the perfect conversational piece for both men and women. Don’t want to spend that much on a striped tie? Then please see my suggested retailers at my section titled “buy ties online”

Fashion Take-Aways for Men
If Aniston’s GQ shot did anything other than make her look even hotter than she already did, it proved to America and the rest of the world that ties and other formal pieces still have a place in today’s fashion industry. After all, people dress more casually now than they have in a long while, and many have all but forgotten what it’s like to throw on a tie and look one’s best. The “GQ tie” as it has become called can look great when paired with any well-tailored suit, and is perfect for those who find themselves in the office on a regular basis.

One thought on “5th Most Famous Tie Wearer: Jennifer Aniston”